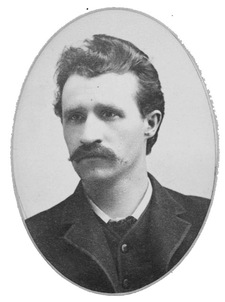 August Spies came to the U.S. in 1872 and traveled  around the country. He settled in Chicago in 1873, bringing to his new home his mother and siblings from Germany. The most educated of the Haymarket martyrs, Spies felt that his philosophy for social change would bring an industrial reformation. Active in the causes of Chicago workers, Spies joined the Socialist Labor Party and was a delegate to the Socialist Convention of 1881. He organized support for striking miners and other workers. At the time of the Haymarket Affair, Spies was the editor of the anarchist daily Arbeiter-Zeitung, the largest German- language newspaper in the city. He was the first speaker to address the crowd on that fateful night. He was hanged on November 11, 1887. August Spies married Nina Van Zandt during the martyrs trial.